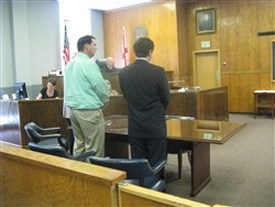 EARLY YEARS & EDUCATION: Jason was born in Dale County, Alabama (Ozark).  He graduated high school from Houston Academy in Dothan, Alabama. Mr. Brogden spent a considerable amount of his time in high-school and college working as a law clerk along-side his trial attorney/judge father.   Jason worked on and observed countless depositions, jury trials and pendente lite and (bench) final hearings.  Mr. Brogden was assisting his father during many bench and jury trials alike before he ever started law school.  After graduation from high school, Mr. Brogden was awarded the “Paul Bear Bryant Scholarship” as a “full ride” (scholarship) to attend the University of Alabama.    Thereafter, Jason graduated as a “Dean’s List” student with a Bachelor’s Degree in Political Science from the University of Alabama.  He was accepted to law school at his father’s ‘alma mater’, the Cumberland School of Law in Birmingham, Alabama.  As a law student, Mr. Brogden spent time out of class working closely with his trial attorney father at his law firm in the preparation and trial of countless criminal and civil trials.  Jason also spent a summer as an “extern” with the Dale County District Attorney’s office in order to obtain ‘first-hand’ experience from the side of a prosecutor which helped to form his style in criminal defense today.   After earning his Juris Doctorate in law and passing the Alabama State Bar Examination on the first sitting, Mr. Brogden relocated back to Dale County, Alabama where he and his father formed the Brogden Law Firm, LLC.  Today, Mr. Brogden and his father practice law together and handle a vast array of criminal defense, domestic, divorce, modifications, probate, real estate, bankruptcy, personal injury and general civil legal matters and mediations all over the state of Alabama, but most commonly in what is known as the “Wiregrass” area (Houston, Henry, Dale, Geneva, Coffee, Pike, and Barbour Counties).

LAW PRACTICE: In the first six (6) months after Jason was admitted to the Alabama State Bar, he was retained to defend and eventually try his first jury trial, a “Sexual Abuse in the 1st degree” indictment.  His client was charged and subsequently indicted for a class “B” FELONY (sexual abuse) carrying not less than 2 years up to 20 years in prison.  After the seasoned state prosecutor presented all the state’s evidence against Mr. Brogden’s client, before a 12 person jury, Mr. Brogden submitted an oral “Motion for a Judgement of Acquittal’.  After consideration, the motion was Granted by the Circuit Judge.  Meaning, Mr. Brogden convinced the presiding Circuit Judge to Dismiss all the charges against his client (see State v. Riley)!   In the following year, Mr. Brogden represented a client during a 5-day Murder trial wherein the Jury found his client NOT guilty of Murder, Manslaughter, and Criminal Negligent Homicide (State v. Cook).  Mr. Brogden’s defense was rooted on self-defense and the “stand your ground law” claim.  In the following years, Jason has handled multiple clients charged and indicted with homicide charges, one in which the trial Court dismissed all charges halfway through the trial in Geneva County Circuit Court (State v. Windham) and another whether a 12 person jury found his client NOT guilt of Murder, Manslaughter and criminally negligent homicide after a 5 day jury trial.  Mr. Brogden also very proficient and enjoys representing clients in connection with all types of contested (and uncontested) high profile/asset domestic relations cases (divorces, juvenile and modifications), real estate matters, wills and trusts drafting(s), boundary line disputes, adverse possession claims, and personal injury/accident cases (and defense of all civil claims).  Jason is also skilled and enjoys the art of drafting, crafting and styling a professional “raw”  legal documents (from scratch), including but not limited to: employment agreements, leases, large-scale rental agreements, covenant-not-to-compete, prenuptial agreements, and contracts for the sale of business assets.

SUMMARY: Alabama trial attorney Jason R. Brogden, Esq. is an experienced, well versed, detail oriented, highly trained and aggressive trial lawyer possessing a wealth of in and out of court experience as a criminal defense attorney, divorce lawyer, civil litigator, corporate counsel, municipal/city attorney, city prosecutor and Mediator as Registered with the Alabama state Court mediation Roster.  Mr. Brogden has defended and/or prosecuted as a city prosecutor almost every type of misdemeanor and felony offense found in the title 13-13A, the Criminal Code of Alabama.  Mr. Brogden’s extensive legal education, training, and experience as a successful jury/bench trial lawyer has equipped him to represent individual and corporate clients in need of a highly proficient, detail oriented and aggressive trial lawyer.   Mr. Brogden is known for his attention to detail and uncanny ability to successfully cross-examine witnesses, research and demonstrate the proper law, apply the prevailing law to the case at hand and present any type of case or argument to a Judge or Jury.  Additionally, Jason is skilled in handling post-judgment remedies and Appeals.   Mr. Brogden has submitted a multitude of successful appellate briefs to the Civil Court of Appeals, the Criminal Court of Appeals and even multiple “Writs of Certiorari” (aka, “writ of cert.”) the Supreme Court of Alabama.

DIGITAL TECHNOLOGY:  Approximately five years ago, in January of 2013, Jason uniquely developed a digital-based “paperless” system for the Law Firm so that all the Firm’s tangible or digital evidence, orders, pleadings, drafts, evidence, discovery and other legal documents are stored (and digitally secured/encrypted) in a  ‘cloud’  based legal management system accessible at any time.   Meaning, ALL the BLF client’s legal documents, pleadings, and typical client files are secured and readily accessible at the client’s or lawyer’s fingertips so that they can be easily delivered right to your computer or mobile device.

Notable and Recent News, Reports, and Publicity:
“Enterprise man used “Stand Your Ground’ defense, found NOT guilty in shooting trial” – NOT GUILTY
Geneva County, Alabama — An Enterprise man rightfully claimed that he stood his ground in self-defense when he shot into an occupied vehicle and was found not guilty in a Geneva County courtroom. Mickey Jordan, 38, was charged with firing a .270-caliber rifle three times into the vehicle of his then-19-year-old nephew, Alex Roy Jordan, while he was physically present (trespassing) on Mickey Jordan’s property in November 2010. According to new reports, “Attorney Jason Brogden, who represented Mickey Jordan in the trial along with Bob Brogden, said Alabama’s Stand Your Ground Law was essential to the case. The attorneys advised the Ledger-Enquirer that Alex had illegally come onto Mickey’s property to steal a piece of machinery. As a result, when Mickey refused to let him take his property and demanded that he leave, Alex threatened to kill him. Then according to Mickey’s attorneys, Mickey got his gun, fired shots towards Alex’s vehicle and called the police for help. Most shockingly, BLF’s client, Mickey was arrested and not Alex.”

STATE v. WINDHAM (FELONY MANSLAUGHTER CHARGES DISMISSED!)  Mr. Brogden’s was retained to defend a client that was charged and indicted for a class B felony, MANSLAUGHTER and was ACQUITTED! The Circuit Court of Geneva County, Alabama Kenneth W. Quattlebaum grants Jason R. Brogden, Esq.’s oral “motion for a judgment of acquittal” (i.e., Directed Verdict) after two full (2) days of testimony and evidence during the ‘Wes Windham manslaughter trial’.   Meaning, Jason argued and subsequently convinced the trial Judge to simply dismiss ALL charges due to lack of evidence AFTER two (2) days of testimony and evidence was put before the jury the Prosecutors! Jason R. Brogden’s client, Mr. Windham, was found NOT GUILTY of the manslaughter indictment and NOT GUILTY of the lesser included offense of criminally negligent homicide. Another prime example of Jason defending innocent clients charged with a violent crime, but once Jason cross-examined state’s witnesses, officers and presented evidence at the jury trial the clients have been found to have reasonably defended themselves in self-defense.

STATE v. COOK (NOT GUILTY OF MURDER – SO SAYS THE JURY!)  After a 4 1/2 day retained jury trial, Jason Brogden successfully defended charges/indictment of MURDER levied against local man, Joshua Cook.  (September 16, 2010).  Mr. Brogden’s client faced a class A felony conviction carrying the possibility of LIFE in prison but was acquitted by a jury of his peers after 5  days of grueling testimony, cross-examination and evidence presented in the Circuit Court of Dale County, Alabama. Mr. Cook was charged with wrongfully discharging a firearm in the front yard of his home killing another man, but he consistently contended he acted in self-defense of he and his 3-year-old son.  Testimony revealed the alleged victim drove to his home, was highly intoxicated and aggressively approached Mr. Cook in an attempt to forcibly take his son out of his car all while threatening him with physical harm.  The Dale County Jury found that Mr. Cook acted in self-defense, under the Stand your Ground Theory; and therefore, was justified in using deadly physical force to defend himself.  The Jury found Mr. Brogden’s client NOT guilty of all indicted charges.

STATE v. JACKSON (MURDER INDICTMENT REDUCED TO A MERE MISDEMEANOR) In this criminal jury trial, Brogden’s client was charged and indicted for the murder of his uncle after a verbal and physical altercation occurred in a neighborhood in Dale County.  From day of the incident, Jason and his client asserted that Nr. Jackson has no choice but to defend himself from serious bodily injury or death by the use of deadly physical force.  After a lengthy preliminary hearing, it was abundantly clear to the court and the district attorney that the self-defense evidence was overwhelming demonstrating that Jason’s client acted in self-defense under the stand your ground laws in Alabama.  In fact, the District Court reduced the client’s bond over $100,000.00 after the self-defense assertion was demonstrated at a hearing.  After a lengthy hearing where most evidence was presented against Mr. Jackson and Mr. Brogden vigorously cross-examined the states’ witnesses/investigators, Mr. Brogden was able to negotiate with the District Attorney a plea bargain wherein Mr. Jackson agreed to accepted mere misdemeanor charge.  After a lengthy sentencing hearing, Jason’s client granted probation and never spent a day in prison.

Mediation  Jason is a “Registered mediator on the state of Alabama’s state Court mediation Roster.”  Jason is a general civil registered mediator, as well as a specially trained Domestic Relations (“DR”) and (“DV”) Domestic Violence mediator with at least 58 hours, or 7 full days of training with Mediation Media CEO/Owner, Troy Smith.  Jason has successfully mediated many civil claims, such as boundary disputes, etc, as well as an abundance of Divorce, Child Custody, Support and Visitation matters as well as modification of the same.   Because Jason is a registered mediation on the state of Alabama’s state court mediation Roster, he may be, and has routinely been involuntarily appointed by at least 3 county/circuit court’s to mediate pending civil and domestic relations case pursuant to the Alabama Civil Court Mediation Rules.

Municipal Law
Representing municipalities throughout Alabama.  Also, proficient as “City court prosecutors” handling each and every ticket/arrest that goes through a municipal court

Admitted to Practice:
All Municipal, State and Federal Courts in Alabama
The U.S. District Court, and
The Middle District of Alabama

Paul Bear Bryant Scholarship Recipient to the University of Alabama in Tuscaloosa;

“Dean’s List” Graduate From the University of Alabama (Bachelor’s in Political Science, minor in History); and

Biography
Certified in the art of ‘Legal Research ‘- Lexis Nexis & Westlaw Next.